WP, “Ukraine and Russia could face a long-term without

‘Declaration to the end of war’. 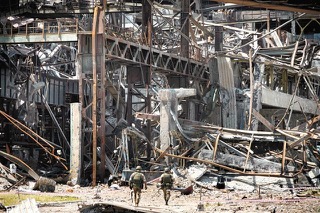 The Washington Post reported that Ukraine and Russia are expected to continue the long confrontation without an end of war, just like the situation on the Korean Peninsula.

The WP said in an expert analysis on the 17th (local time) that Western countries, including the United States, are preparing for a prolonged war in Ukraine.

The media explained, "Since South and North Korea signed a ceasefire agreement in 1953, the war has not been officially concluded so far, and the level of conflict sometimes rises at the inter-Korean border where heavy armed soldiers are deployed."

"If the confrontation between the current occupied area of Russia and the rest of the Ukrainian military control area is prolonged, there is a possibility that a structure similar to the inter-Korean confrontation on the Korean Peninsula will be formed between the two regions," he analyzed.

Mark Millie, chairman of the U.S. Joint Chiefs of Staff, recently analyzed, "Even if Russia suffers from instability in its command system, falling morale, and military problems, the situation in eastern Ukraine is more inclined toward Russia."

Russia is gradually expanding its occupation area by destroying major Ukrainian bases with long-range missiles after failing to occupy Kiiu in the early stages of the war and changing its goal to "targeting Donbas."

As a result, the West seems to be preparing for a prolonged war by constantly sending aid supplies to prevent Ukraine from losing. Regarding this, WP analyzed that Ukraine's victory is a long way off, but it is an effort to prevent the worst possible outcome if Ukraine loses.

Chicago International Affairs Committee Chairman Ivor Dalder, a former U.S. ambassador to NATO, told WP, "What is given to the U.S. in a deadlock is only a cool option. It is to support Ukraine to continue to bleed, or to cut off support and endure Russia’s victory'. But cutting off support is like throwing Ukraine into a pack of wolves."

The WP said the U.S. has no choice but to continue to provide support to Ukraine despite side effects such as a global economic recession and food crisis to prevent Russian President Vladimir Putin from crossing Ukraine and neighboring NATO members.