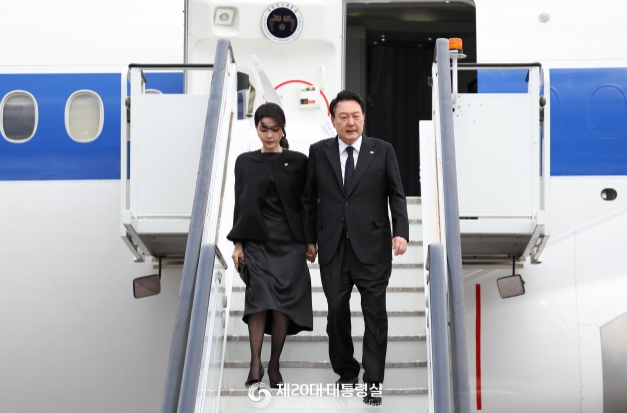 President Yoon Seok-yeol arrived in London to attend the funeral of Queen Elizabeth II.President visits Westminster Hall, where Queen Elizabeth II is enshrined.He will then attend a reception hosted by King Charles III of England to express his condolences.At the meeting, he is expected to meet with foreign leaders, including U.S. President Joe Biden, who gathered to attend the funeral.

Prior to this, there willbe also time to lay flowers on the memorial to the Korean War.Britain dispatched 56,000 troops during the Korean War, the second largest after the United States.

Queen Elizabeth II has a special relationship with korea.She visited Korea for the first time as a British monarch in 1999 and receiving a birthday award at Hahoe Village in Andong.

After attending the funeral, President Yoon will finish his two-day London schedule and head to New York, where the U.N. General Assembly will be held.

He will deliver his first keynote speech at the U.N. General Assembly and hold bilateral talks with U.S. President Biden and Japanese Prime Minister Fumio Kishida.In particular, the first formal bilateral meeting with Prime Minister Kishida is expected to discuss pending issues such as forced labor.