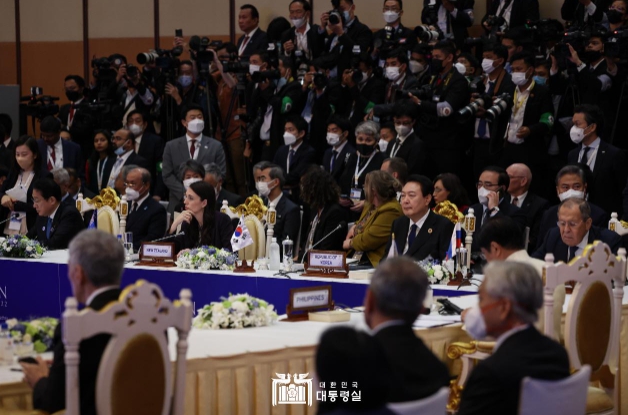 President Yoon Suk Yeol attended the 17th East Asia Summit in Phnom Penh, Cambodia, on the morning of November 13.He explainedkorea’sposition on major regional and international issues based on Indo-Pacific strategy, and expressed his willingness to actively contribute to freedom, peace and prosperity in the Indo-Pacific region.

President Yoon first said that our humanitarian strategy aims for a free India and the Pacific Ocean that protects universal values.He emphasized that core values such as freedom, human rights, and the rule of law in the region should be respected, and changes to the status quo by force should not be tolerated.

He said he supports ASEAN's efforts to achieve this goal, adding that he will further expand humanitarian aid to the people of Myanmar based on close cooperation with the international community.

The South China Sea should be a sea of peace and prosperity that upholds the rule-based maritime order, freedom of navigation and overflight should be guaranteed under the principles of international law, including the United Nations Convention on the Law of the Sea and refrain from escalating tensions.


President Yoon specifically presentedkorea’s position on major regional and international issues based on our independent Indo-Pacific strategy during the East Asia Summit.He clearly imprinted our will to contribute constructively and actively to realizing the Indo-Pacific region of freedom, peace, and prosperity.
KYUWON CHUNG 기자 kyuwonchung61@gmail.com 이 기자의 다른 기사 보기