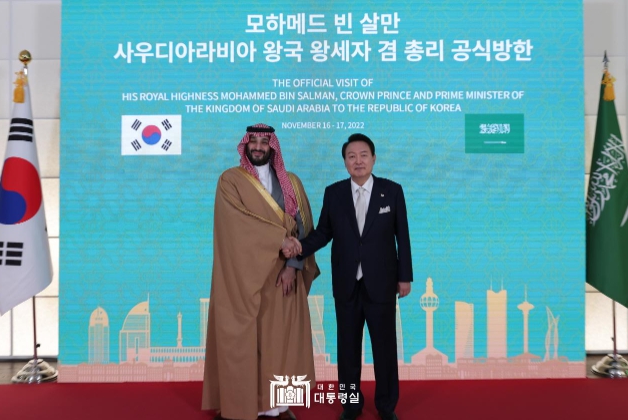 Yoon Suk Yeol held a meeting with Saudi Arabian Crown Prince and Prime Minister Mohammed bin Salmanon the 60th anniversary of the establishment of diplomatic relations between South Korea and Saudi Arabia on November 17. They exchanged broad and in-depth opinions about the situation on the Korean Peninsula and the Middle East.

President Yoon evaluated Saudi Arabia as Korea's largest trade partner in the Middle East and a key partner in our economic and energy security as a foreign construction partner.President said that now is the right time to take the relationship to a new level through Saudi "Vision 2030" under Prince Mohammed's leadership.

In the future, it is expected that the two countries will expand and develop cooperation in investment of new growth fields by participating in mega projects such as NEOM, defense industry cooperation, future energy development such as hydrogen, cultural exchange and tourism activation.

Also, two countryexchanged views on the situation on the Korean Peninsula and the Middle East during the meeting.

Prince Mohammed's visit to Korea came three years after 2019, which is considered an important opportunity to take a leap toward a new stage in bilateral relations.